Tantra –  the yogi, the artist and the pundit

Much is written about Tantra in India, in Tibet and in the West. The real tantrics, however write less, if at all; they “whisper”; that is, they pass on the secrets directly, from person to person. The way I have experienced it, Tantra is the original source of yoga in India.

A lot of ideas are circulating about Tantra. The learned say: “Tantra is the source of mantra and yantra.” The man in the street, for instance in Mumbai or Delhi, says: “It is all about sex.” Quite different is it with the yogis like Ramakrishna, Sri Aurobindo, Swami Muktananda and above all with my teacher and guru…

What has been good about our times is the freedom we have had to test and practise what in earlier times was inaccessible. That which Tantra stands for: the original yoga, the meditations and the rituals. 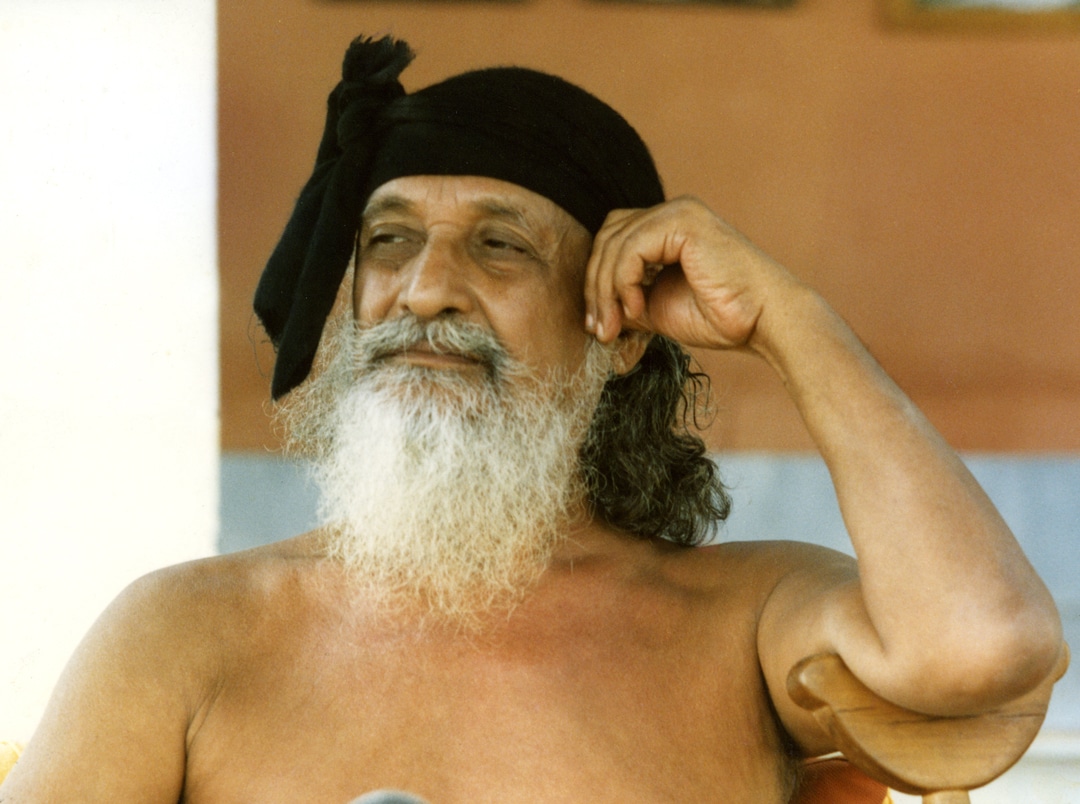 Paramahansa Satyananda in the 1990s

“Tantra is essentially a practical science rather than an intellectual one, and only practice leads to true experience and real understanding. … Perhaps the greatest contribution of tantra to the modern world will be its ability not just to define the mind and put it into perspective, but to deliver techniques by which we can experience the mind itself and eventually transcend it”
Swami Satyananda

Through the rituals, you confront and transform your fundamental fear. Fear that limits your potentials and your courage to use them.

There are rituals that confront you with death, loneliness or sex – such rituals are often extensive. To the sexual ritual, there is a comprehensive preparation: to clean yourself physically and psychically; to clean the house; the massage of the partner; the preparation of your state through yoga and above all the eating of the meal before the act.

Late in the 1960s, when I lived with Swami Satyananda in his ashram in India, I asked him about introducing the tantric Chakra – a circle where 16 pairs are sitting participating in a sexual ritual.  Swamiji thought that the time was not ripe for such an act.

Five years later, when I was writing the first edition of my book Yoga, Tantra and Meditation in Daily Life, I wanted to broaden the scope of yoga and counter the people that presented yoga as only for ascetics. I wanted to come across with a message about an open and accessible yoga the way Swamiji had showed me. So, I added the chapter on The Tantric Sexual Act. This was met with his approval.

“The definition of a ritual is that you must empty yourself first, then you get something in return. You must know how the ritual works, for if you cannot empty yourself, you get nothing.”
Sohan Qadri

On my way back to Denmark in 1970, I stayed for a while in Delhi, where I met Ajit Mookerjee. He was at the time, director of the Craft Museum. His first book Tantra Art had just been published; it overwhelmed me. I had no idea that such a high class art existed – and that it came from the same background and tradition as the yoga and meditation that I had been initiated into during the years with Swamiji.

“This art is not a profession, but a path towards truth and self-realization both for the maker and spectator.”
Ajit Mookerjee

Swamiji had shown me the tantric yantras and symbols, and now the yogic artists confirmed my experiences in a surprisingly new and inspiring way.

“To penetrate the enigmatic silence, the shilpi-yogin [expressing himself in art] has employed the yogic processes … What the shilpi-yogin arrives at through form and color relates to his inner spiritual growth.”
Ajit Mookerjee

“I believe that any act that man is doing with awareness — is yoga. To make a chapatti is just as much yoga for me as painting a picture is — to cook or to consider something.
For the painter, there is an empty canvas, and that is a flag — hungry with an open mouth, and if you don’t feed this canvas with something, then you will never get a picture painted. You are the food, the artist is the food. He must let himself be completely swallowed. That is how a ritual works.”
Sohan Qadri

The artist and poet Sohan Qadri, grew up in a village in Punjab in Northern India in an environment where Tantra was part of life. Today, as a representative of the timeless art of Tantra, he is recognized worldwide. He had settled in Copenhagen and I met him soon after my return to Denmark.

“Tantra is a discovery that there is something beyond the aesthetic, beyond what we are used to experiencing with our senses. The aesthetics have been limited by the materialistic — poetry, literature, painting and the description of them is limited because it must be nice and it must please.
As long as it is only through the senses and conceptions of the mind you perceive, so long you do not perceive the magic in a picture.
I am not against sense perceptions, it is enriching and satisfying, but it stays on the material level. It will not be explored further. In primitive art however, you work with this, there is more closeness — you touch other levels than just the senses. Tantra art too is not just for the senses. The symbol awakens something that is beyond the senses, beyond the aesthetic.”
Sohan Qadri

“There is something higher than love – and that is Union.”
Swami Satyananda

My acquaintance with Ajit Mookerjee, opened to yet another side of Tantra. Around the time when Ajit Mookerjee began visiting our ashram in Scandinavia in the early 1970s, Tantra Asana, his second book was published. Asana meaning here, the sexual poses. This book turned out to be as inspiring as the first and during one of his visits, we decided to go from theory to practice and arrange Maithuna rituals – Chakra Puja – at our Retreat Center in Sweden.

“Through Tantra asana, sex liberates us from sex, and we are freed to a plane of cosmic awareness. The asana itself is a means for the expression of pure joy (ananda) in which the yogi and yogini realizes that the elements and forces of the universe are within him and her.”
Ajit Mookerjee

Sohan Quadri became my sparring partner and lifelong friend. With him I could test the fundamentals of Tantra and expand the knowledge of the tradition that I had originally received from Swami Satyananda. He also, I gradually discovered, had a deep and both practical and philosophical knowledge of the sexual side of Tantra. 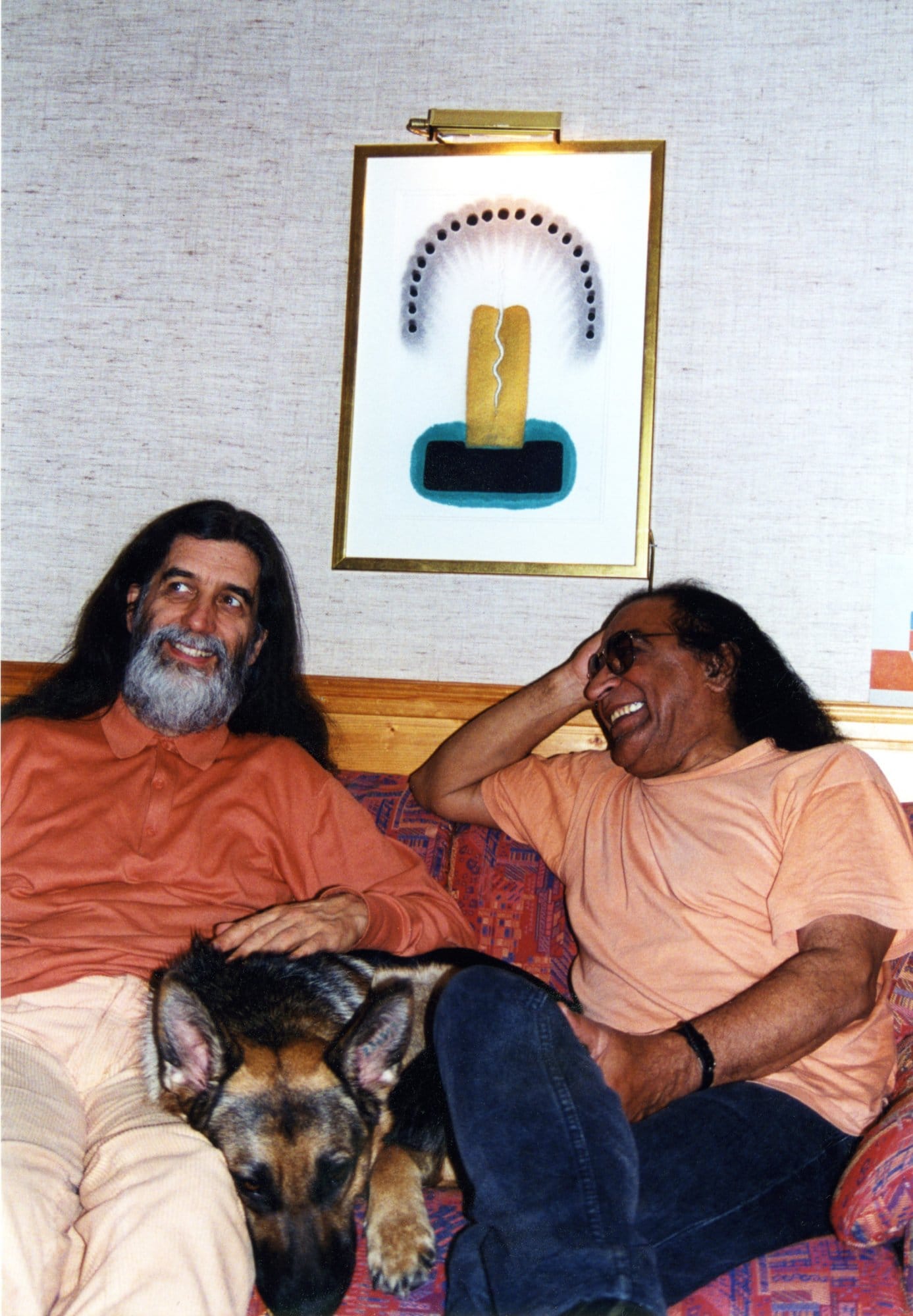 “Tantra is ever open to the physical and psychic needs of humanity and includes them in man’s spiritual aspirations. For those who wished to work with themselves, precise methods were worked out. The woman and the man, with their bodies and minds, their hopes and desires, now become the most important element in this tantric yoga ritual. The fact that woman and man together became active participants in the use of these methods on the path towards freedom and enlightenment, ensured the success of the rituals in the transformation of consciousness.

The way sex is linked with life, so it is also linked with Tantra. Sex has an important place in life and Tantra only gives it the position it deserves.”
Sohan Qadri

“In every human being, the psychic and physical meet in the orgasm. And this meeting during the moment of ecstasy we call sexual.”
Sohan Qadri

“At the start of sexual union,
keep attentive on the fire
in the beginning,
and, so continuing, avoid the embers
in the end.“
Vigyana Bhairava Tantra

The Tantra-tradition and human evolution

Occasionally, I come across misconceptions, that the great tantric Kriya Yoga is either an ethical discipline or a sexual practice. The latter is maybe based on the idea that anything tantric is about sex. However, this is not the case, take for instance the 5000-year-old text Vigyana Bhairava Tantra. It contains 112 practices, out of which only four are of a sexual nature.

“Awakening of kundalini is very difficult. You can try the various yogic and religious practices that have evolved throughout the ages, but they require a lot of self-discipline and demanding austerities. There are so many dos and don’ts that the average person finds unpalatable. Therefore, the rishis of the tantric tradition evolved a series of practices that could be easily adopted by every type of aspirant regardless of his lifestyle, habits, beliefs, and so on. Of course, there are many practices belonging to tantra, but of them all, Kriya Yoga is the most powerful and suitable for the modern-day man who is enmeshed in this world.”
(Swami Satyananda)

So, Kriya Yoga is not a sexual practice, nor an ethical one. I see it as a Sadhana for those who come to a point in their spiritual evolution, where they realize that they themselves must participate. So far, the evolution that we are all part of, has been happening by itself – apparently unconsciously. To me, true spirituality is when we consciously take steps to participate in our own development – when we find the way to the deeper identity, and not just believe that we are the surface personality.

“I am the seer of all that which is taking place in me. I am impartial, detached and unrelated.”
(Swami Satyananda) 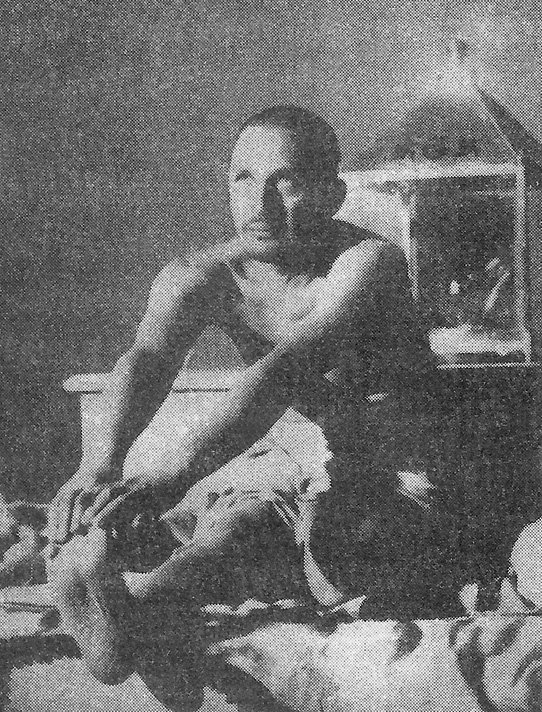 In the late 1970s, I was faced with the challenge to decide whether the sexual practices should be part of my teaching. If so, with great consistency, I should explore the sexual side of Tantra further – inspired by my two friends Sohan Qadri and Ajit Mookerjee.

The more advanced Kriya Yoga (Kundalini Yoga), however, that supply you with enough energy to make a difference in your life – and also the other tantric meditations such as Yoga Nidra, Prana Vidya, Inner Silence, (practices that were revealed to us in the 1960s by Swami Satyananda) were closer to my heart. I decided to creatively limit my teaching to this wonderful Sadhana.

Of course, one of the fundamental aims of any tantric process is to attain the capacity to let go of fear and to attain expansion of consciousness – that involves the realization that the personality or mind are tools for the soul, and not the true identity.

In former times, the word Geist (mind) in German had the meaning: „Schrecken der Seele“ – That which frightens the soul. 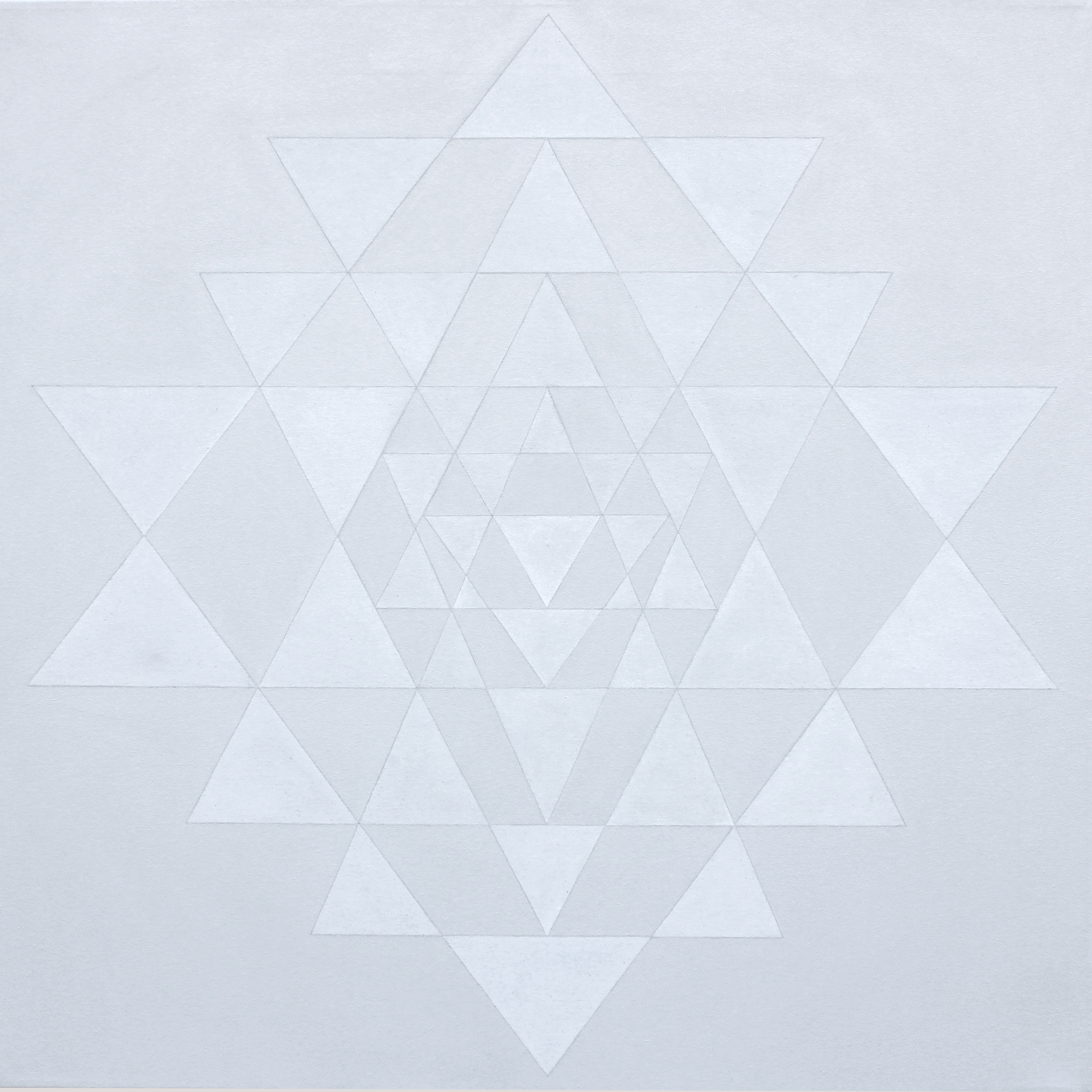 Painted by Carsten Crone Caroc, a Danish artist and yogi

“O Shiva, what is your reality?
What is this wonder‑filled universe?
What constitutes seed?
Who centers the universal wheel?
What is this life beyond form pervading forms?
How may we enter it fully, above space and time, names and descriptions?
Let my doubts be cleared!”

Shiva answers her questions, not with lengthy explanations of the reality she asked about, but with 112 hints of practices that lead you to deep and personal – or beyond personal – experiences. With this guidance he implies that you will see:

“This so‑called universe appears as a juggling, a picture show. To be happy look upon it so.“

“While being caressed, sweet princess, enter the caressing as everlasting life.”

The full-width painting below was created by Bjarke, an artist and yogi, the founder of the Scandinavian Yoga and Meditation School in Bergen Norway.

The inspiration for this article came through an enquiry from the editor of the German magazine Yoga Aktuell, where it was published. 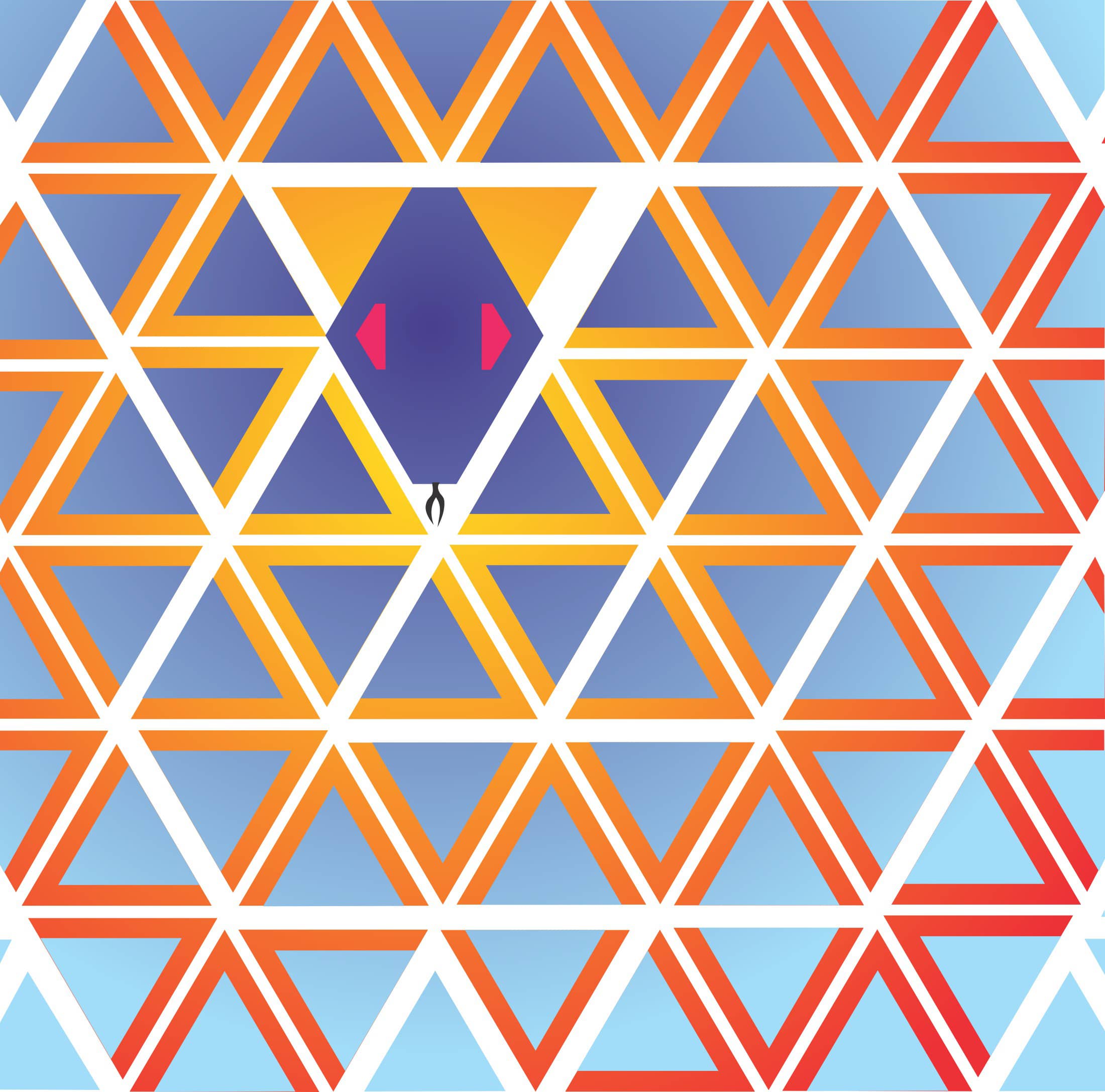