On a Wavelength with Oneself

“One morning, when I was in third grade, I was very sleepy. The maths teacher was too speedy and like the other children I didn’t have much interest in being attentive. I put my fingers in my ears and, to my surprise, I could hear sounds. It sounded like the chiming of bells, and I wondered where it came from. I removed my fingers but I didn’t hear any bells in the classroom, only the monotonous voice of the teacher. I plugged my ears again and started to concentrate on the chiming. I noticed that the sounds changed and that a high frequency sound gradually became clearer. The sound was not unpleasant and it became steadily clearer and lighter.

After a while, I removed my fingers from my ears again and marvelled that now, completely without effort, I could listen to and follow what the teacher was going over. I felt clear and alert quite unlike my classmates who sat and slouched over their books.” (Ananda Murti)

“My mother comes from a Christian background in the south of Jutland, but even though, as a grown up, she was no longer a Christian, she sometimes used expressions which stem from the Christian faith.

She worked every day in her kitchen garden and when she came in late in the afternoon with vegetables for the evening meal she would say, `Ah – it’s so lovely outside, it’s as if angels are singing …`

I remember as a 10-year old that almost every day I went fishing down at the brook in the twilight. At that time, there would be a breathless silence before the light disappeared. During those moments so close to nature, I heard high tones above me, like fine light voices but when I looked up into the evening sky, there were no angels. For me, the sound was just there when I was really having fun playing.” (Omkarananda)

“A female student on a longer course (in Austria) was very enthusiastic about Nada Yoga for she had heard the most beautiful music during the Nada Yoga meditation – it simply surpassed anything she had heard before. She would like to have written it down but, as a dream fades away after some time, so too did the music…

Another woman came to me after a class on a weekend course ( for advanced students – November `96 in Hannover) and said that she had been disturbed by the music that was played somewhere in the house during the Nada Yoga meditation. It was lovely music that she had heard – Spanish guitar music – but it had been so intrusive that she had not been able to hear any other sounds. I assured her that there hadn’t been any music playing in the vicinity during the meditation – and besides she had had her fingers in her ears.” (Jørgen Hastrup)

“One morning, I was lying on my back practising Yoga Nidra after a short programme of yoga and breathing exercises. All of a sudden, I experienced very pleasant classical music with strings, flutes and harps… The music was as real as in an actual concert. Maybe it was the relaxation that allowed me to enjoy the music without wondering where it came from. But when I realised that the music was part of my meditation I became so surprised that the music disappeared.” (Omkarananda)

“Lizzie has tinnitus (buzzing in the ears). She got it after an accident when she hit her head hard. However, she has always been sensitive to sounds. Her tinnitus sounds, at best, like the rustling of leaves in a forest, but it can also sound like a diesel engine and other humming sounds. As the sounds are there constantly, they cause her to always have headaches. Now, with the use of Ear candles, she experiences a relief. Her headache goes and although the sounds are there but fainter, they don’t disturb. The effect lasts for a couple of days.

I taught Lizzie Nada Yoga. She says that she often listens to the tinnitus sounds without putting her fingers in her ears. The sounds are transformed and become high frequency and, because of that, they don’t bother her. She says that when the sounds become higher she becomes completely relaxed in her body.

For Lizzy, the Nada Yoga sound is quite different from the tinnitus sounds.” (Ananda Murti) 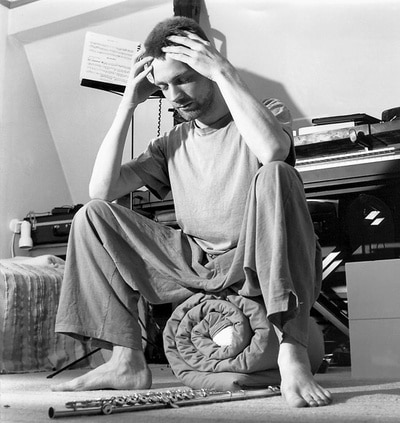 Musicians use Nada Yoga as a Creative Tool – Conscious or Unconscious

It is not something new to experience music in the mind. Several classical composers and modern musicians have described how they have experienced music in a relaxed state after which they have been able to write it down on a sheet of music.

“Previously, I spent almost all my time playing music. I had an intense practice schedule where I was often going for hours on end – so I needed to find an effective way of having short breaks, to `wipe the black-board clean’, rest my ears and rediscover spontaneity and concentration.

I discovered that Nada Yoga was one of the best things I could use. When I reached a point in my practice where it fitted in, then I made a hard little ‘roll’ with whatever was at hand – a sweatshirt, a jacket, a scarf or the like – and sat on it on the ground in the Nada Yoga meditation pose. (See the picture on this page and Nada Yoga)

After having played music for a long time, the Nada sound was always strong and easy to hear. A high clear tone, usually, which I listened intensely to until a finer tone behind it became audible. Then I ‘jumped’ on to that and continued to listen.

I continued until I reached a point where I was no longer interrupted by thoughts, states or feelings. That point where I forgot everything else and just heard the sound. Then I stopped. The whole thing had only taken a few minutes; and maybe I had just been one with the Nada sound for a fraction of a second. But that was enough.

I felt myself to be clear headed, concentrated and relaxed at the same time and my hearing was once again open and sharp. And when I continued to play, then it was music I was playing and not empty technique.

The music was no longer work but fun.” (Turiya)