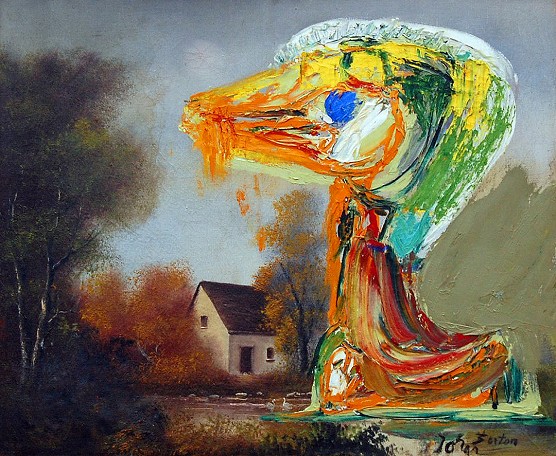 The Danish fairy tale author and poet Hans Christian Andersen once said, “I do not know if the presence of swans means good fortune – but the absence of swans, I know, means misfortune.” In a figurative sense, as in his fairy-tale The Ugly Duckling, this means that a lack of creative people is not good for a society. A society in which one does not understand how to promote the creative process – can bring misfortune. And here I do not talk about critics or watchdogs, but about the very people who come up with good ideas, inspire each other and who understand how to mirror society and its individuals and thus raise its consciousness.

From Ancient Greece, the Muses are handed down to us. They help us awaken the inspiration and keep it alive.  I first heard of the Muses  during my schooldays, where we learned about Danish and European culture. Artists mentioned them in their works, and later in the classical studies we heard: “The Muses knew everything (Mnemosýne, memory, was their mother) and they could inspire the poet and put the right words in his mouth. Therefore, they became the protectors of literature and eventually of the other fine arts.” (Leo Hjortsø). The Muses were originally the nymphs of the fountains. Those who drank from the spring water would be inspired. Later, the Greek muses shared the arts between themselves and each received one of the following: the historiography (the writing of history); tragedy; comedy; dance; the erotic poetry; epos; the playing of flutes; the hymns that honour the gods – and astronomy – there was a muse for each. 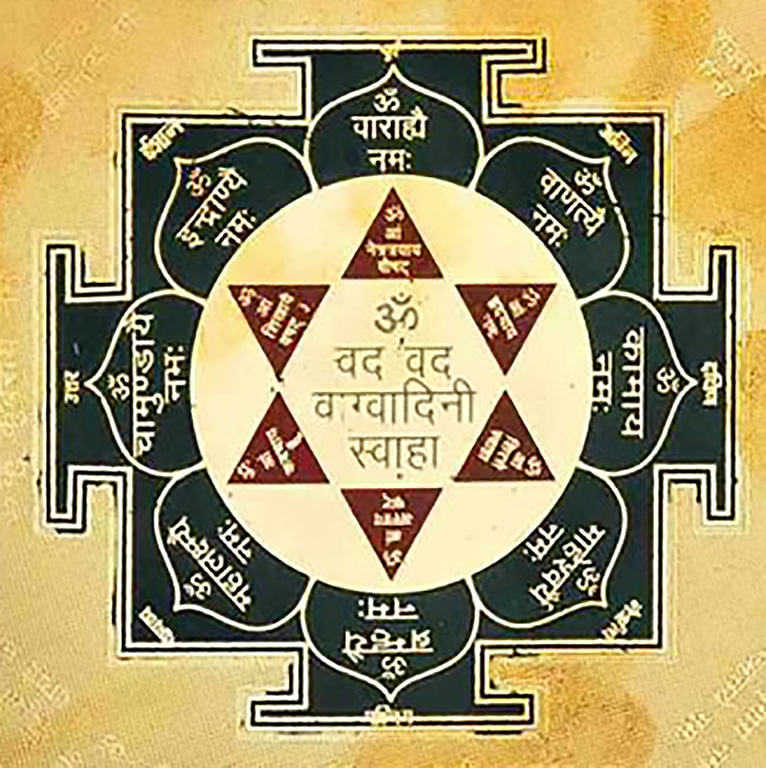 A Saraswati yantra with the mantra OM Vad Vad Vagvadini Swaha; the giver of knowledge, wisdom and eloquence.

In Indian culture, a similar force or Shakti presents itself to us. It is personified in one figure, the goddess Saraswati. She manifests as a support or energy in all knowledge and learning, behind science, poetry, painting and music, just to name some of her attributes; but she also stands behind the wisdom and creativity needed to convey yoga and meditation. Maybe that is why one of the four branches of the Swami-order bears her name: Saraswati.

In 2005, I was in Kerala, India. At that time, Saraswati was celebrated with puja, music and processions. At our place in the river, where we anchored our boat overnight in the Back Waters, the music sounded all night from a temple on the opposite bank. The day before, no matter where we landed, schoolchildren stood by the quay ready to receive our gifts in the form of pens and notebooks for the beginning of the school year. So, in that way we celebrated Saraswati. Naturally! She is also the protector of schools and education – and Kerala was the first state in India to defeat illiteracy.

Saraswati is accompanied also by a swan. It leads us to yoga. In Sanskrit, the swan is called Hamsa and represents one of the most important concepts, namely Viveka: to distinguish the real from the unreal, that is the ability of the swan. In the mythology, it is said to be as difficult as distinguishing milk from water in a mixture of both. In meditation, the individual soul or self is experienced as the innermost reality.

Swami Sivananda Saraswati was originally a doctor and worked for many years in this profession, both in research and in practice with a jungle hospital in Burma. When he returned to India to be initiated in the Swami order of Saraswati and settle down in Rishikesh, it was not to become passive and withdraw from life, on the contrary. Initially, after his return to India, he was still active as a practising physician for the needy. In particular, he helped the lepers, who lived in a colony outside Rishikesh. He also began to examine the knowledge of yoga among his generation’s yogis.

He became acquainted with many of the yogis who stayed in Rishikesh and Haridwar at the time and took part in what they knew about yoga. Later, in other places in India he met with yogis. Adding to that, he also had a knowledge of the classic texts  of yoga, for instance the ancient text of the Kundalini Upanishad. He was then able to compile and record much of the content of the living yoga tradition in exercises and practices; and in his work as an author and a teacher, pass on this knowledge.

Swami Sivananda has inspired many people to continue the work he has begun and clarify the possibilities that exist in the yoga tradition; not only as a healing and health-enhancing therapy, but also as a path in the spiritual evolution of man. Swami Satyananda Saraswati, a student and chela who was close to him, was inspired to study in depth and clarify the meditations and practices of the tantra-tradition. After twelve years in Swami Sivananda’s ashram, Swami Satyananda travelled around India for eight years as a wandering swami. He told me how he, during this period, sought out tantric power-  and assembly-centers. Eventually, he settled down in Monghyr in Bihar, where after some years of intense sadhana, he began to teach. 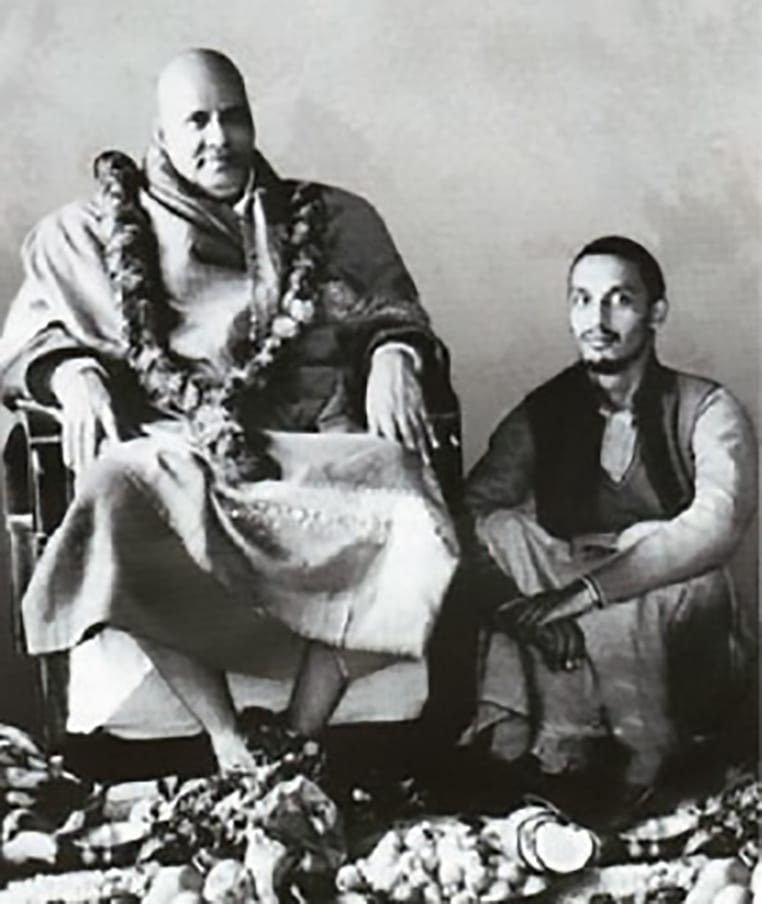 As we can see, the name Saraswati really fits Swami Sivananda and his chela Swami Satyananda – when we look at everything we have inherited from them.

When I began to think about the name Saraswati and how it fits into my life – and about the people I’m surrounded by and know in connection with my activities, I realized that it was not a coincidence that I met Swami Satyananda and let myself be initiated into the Saraswati order. Many of the creative people who became part of my life basically have to do with the creativity I use to convey the tantric yoga and meditation. This applies to artists, musicians, researchers, film people and scholars. And the Tantra tradition itself after all, includes art, science, wisdom, poetry, painting and the applied science of yoga and meditation. To put it mildly, I was surprised at how well the qualities of this muse or goddess fit into the big picture.

What is the purpose or intention of the muses – and Saraswati? It is to encourage the artist, the teacher, the swami, to influence the viewer, reader, student and listener’s mind through art, music, theatre, dance and meditation so that they open up and free themselves from habitual thoughts and prejudices; so that man can realize that he is alive, so that he can expand his consciousness and find an insight and an ability to experience, through which he becomes present and can make a difference. Through these media, an altered state can be induced in body and mind – an open state.

The muse for the theatre and comedy in ancient Greece was called Thalia. Above the opening of the stage in the Royal Theatre in Copenhagen is written: “Ej blot til Lyst” – “Not just for pleasure”. I interpret that as follows: not just for entertainment that makes you forget yourself, but for something of greater value, something that at least makes you wonder, and realize that you don´t know everything in advance, but it is something that can spur you and get you to see life with a new or greater perspective.

From many a musician today, a performance is expected to entertain and captivate people, who will then applaud loudly. You clap. Here, no silence follows the music, so it can subside gradually. No peace follows to allow the transformative effect of music to settle – not even at a church concert is there silence after the music! Sometimes the same applies to meditation: from a group meditation you immediately come out, move, rub your body or your eyes or start talking. I propose that you remain seated for a moment after the meditation and experience the surroundings as a whole and yourself in it, thus retaining an important part of the meditation effect.

“One good thing about music, when it hits you, you feel no pain.” (Bob Marley).

There is a music that transforms. Which it is, you figure out for yourself. At some point in the process of listening it causes you to let go of the ‘understanding’ or ‘appreciation’ and instead you surrender – just as in a meditation, you let go of the effort and let that happen, which happens by itself – just as you let go of the expectation that something special should happen. That’s what I’ll call transformation – or, as Maharishi Mahesh Yogi called it, transcending.

If the musician is only out to show off and receive applause, or if you are looking for experiences and performances in the meditation, avoiding the devotion, you have not let Saraswati in and received her inspiration.

If, on the other hand, you’ve experienced that it can happen in music, you may also find it in meditation – and if you know it from meditation, you may find it in the music too. 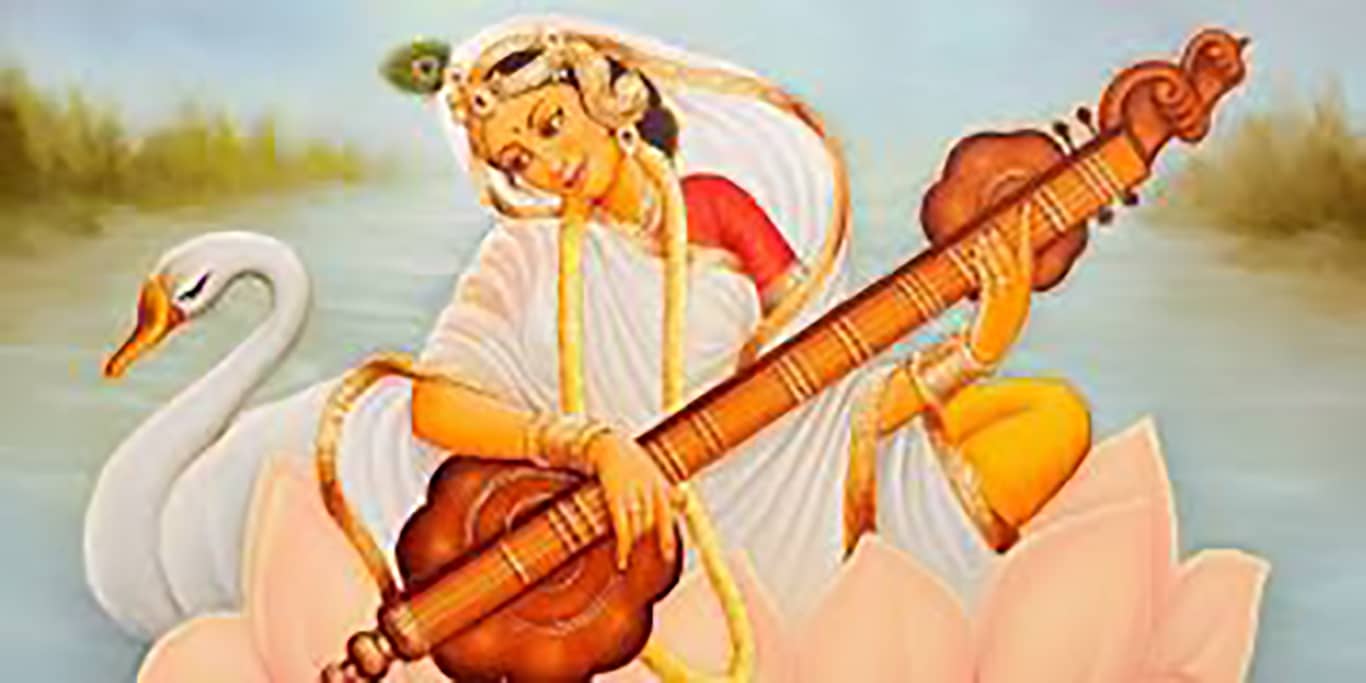 Saraswati is a musician, she plays the vina

“The flute of the Infinite is played
without ceasing, and its sound
is love:

When love renounces all limits,
it reaches truth.

How widely the fragrance spreads!
It has no end, nothing stands
in the way.

The form of this melody is bright
like a million suns: incomparably
sounds the vina, the vina of the
notes of truth.”